March Choral Evensong at St Mary’s provides another great opportunity for Jonathan Goodchild to use the chamber organ, with its limited but pure sounds – no feet (Jonathan, not the organ) and no electronics (the organ, not Jonathan): in fact everything is mechanical except the external blower. 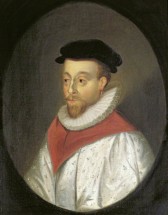 The Magnificat and Nunc Dimittis will be from the 2nd service of Orlando Gibbons. Gibbons (1583-1625) was one of the youngest of the “Tudor” composers and most of his music was written in the seventeenth century. He was a fine keyboard player as indicated by a report of an official visit of the French Ambassador to Westminster Abbey in 1624: at the entrance, “the organ was touched by the best finger of that age, Mr Orlando Gibbons.” As a composer, Gibbons brought new ideas in form, and his music always seems to have a sense of direction. In particular, he developed the earlier style of “verse” composition into one where different combinations of solo parts alternate with sections for the full choir, and the music has greater continuity. His 2nd service is one of the greatest of all settings of this type of composition; some might say it ranks among the finest of all settings of the evening canticles.

After the organ introduction, the early verses proceed smoothly enough (“My soul doth magnify”, alto and tenor: “For behold”, two sopranos and tenor: “And his mercy”, two sopranos), but then Gibbons really winds the music up at “He hath showed strength”, two altos and two tenors, where the imitation between the voices paints a vivid picture of the “scattering of the proud”. The mighty are then put down, appropriately enough, by two basses. And so the music continues before being brought to rest by the most exquisite and languid “Amen”. The verses in the Nunc Dimittis are for two sopranos: the Gloria is different from the Magnificat but concludes with same Amen.

The anthem is ‘Out of the deep’ by Thomas Morley (1557-1603). Morley lived not much longer than Gibbons, but a generation before him. His treatise A Plaine and Easie Introduction to Practicall Musicke of 1597 is a comprehensive instruction manual for composers and one of the earliest in the English language. He was also largely responsible for the vogue for English madrigals in the 30 years from about 1590. (Does anyone sing madrigals these days?) Among his own best known works are ‘Now is the month of maying’ and ‘Fire, fire’, but his two- and three-part canzonets have been used by generations of musicians as counterpoint exercises.

It is particularly interesting to hear ‘Out of the deep’ alongside Gibbons’ 2nd service, because the Morley represents the earlier form of verse writing, as found in the works of his teacher, William Byrd. Here there is only one solo voice throughout, alto, possibly the voice Morley himself sang at St Paul’s. Solo and chorus alternate four times; the choir writing is mostly chordal, and the music is more sectional and the mood more static than in the Gibbons. Morley also knew how to write a fine and conclusive Amen. The words of the anthem are the familiar ones of the Prayer Book version of Psalm 130.

The responses will be the setting by Philip Radcliffe which we sang in February. Evensong is one service where the tradition of singing psalms to Anglican chants is kept alive. The origins of this type of chant go back to the the time of Gibbons and Morley. There are two psalm settings by Gibbons in the form of repeating music to each verse of the psalm; the two parts of Psalm 145 were among the early recordings of King’s College choir under Boris Ord (1956) and David Willcocks (1959). In Tudor and Jacobean times the patterns were more elaborate and the music was fully written out. Tonight we sing Psalm 50 to a chant by Rev Phocion Henley (1728-1764) who was Rector of St Andrew’s-by-the-Wardrobe with St Anne’s, Blackfriars. This chant comes from:

Divine harmony: being a collection of psalm-tunes, in three, four, and five, parts, composed by the  late Rev. Phocion Henley, M.A. and the late Rev. Thomas Sharp, M.A.

It’s quite a good chant, but “divine harmony” seems to me to be overstepping the mark. I don’t have the hymn list for March as I write, but you have to be careful about Welsh hymns during the Six Nations Rugby Championship. I have had cause to remonstrate in the past with vicars who scheduled ‘Guide me, O thou great redeemer’ the day after Wales had beaten England – again! Rev Will Gibbs managed to avoid my censure this year by putting it on after Wales had beaten Italy. It is a great hymn (Welsh composers were good at avoiding the sentimental excesses of the English Victorians), but there are times and places!

Back to Gibbons for the voluntary, Fantasia in A minor (Musica Britannica vol XX no.10), which is a good example of the shape that Gibbons brought to his music. A long imitation point on a theme with decreasing note-lengths leads to a section with semiquaver scale passages in alternating hands. Do we still think they played this without using their thumbs?