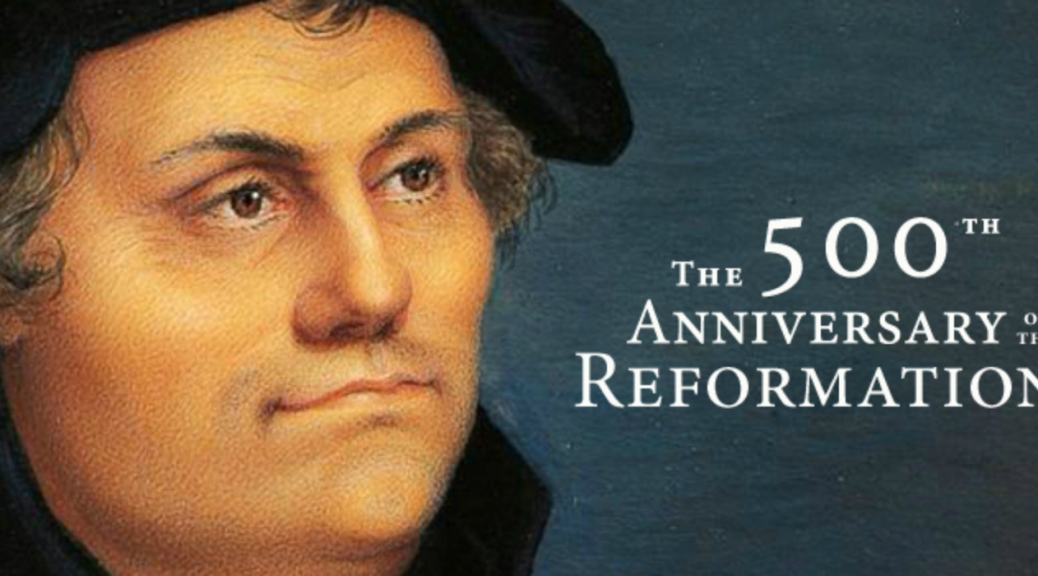 2017 is the 500th Anniversary of the Reformation

Short Address by The Revd Will Gibbs: ‘What does the Reformation means for us today?’

No Choral Evensong in August, but, a little over a year after this column first called for it, we are to get a Choral Matins. Many thanks to Jonathan and Will. Firstly, though, are you for one or two ts? I’m for only one because of the linguistic link back through the French matin to the Roman god of the morning, Matuta. But there’s more to it. The first Prayer Book of King Edward VI of 1549 has “An order for mattyns dayly through the yere”, but elsewhere uses Matins. I can find no mention of Matins in the second Prayer Book of 1552, which uses only “Morning Prayer”. And the only reference to “Mattins” (and, for that matter, Evensong as well) in the 1662 BCP is in the table of Proper Lessons for Sundays and Holy-Days. The order of service is for Morning Prayer, and the psalms are set for use at Morning Prayer and Evening Prayer. All of which makes me wonder why Matins remains such a familiar term for the traditional morning service.

The Morning and Evening Prayers, or Matins and Evensong, of the Prayer Books of Edward VI were a skilful reworking of material from the canonical hours, Matins from Matins, Lauds and Prime, Evensong from Vespers and Compline. The shape of each is the same, Confession and Lord’s Prayer, Preces, portion of Psalter, two lessons, two canticles, Apostles’ creed, Responses, collects, anthem and prayers. The Preces and Responses are identical in both services, and we shall sing the setting of William Smith of Durham. Smith (1603-1645) is, as far as I’m concerned, unknown except for these responses, but it was these responses which led the way for the introduction, in the 20th century, of the more adventurous settings which dominate today’s choral services. Smith’s remain the most recognisable of the more elaborate settings.

A hundred years ago, most cathedrals had sung Matins and Evensong every day of the week. Evensong continues to thrive, but Martin Thomas in his book English Cathedral Music and Liturgy in the Twentieth Century makes an interesting comment on the demise of regular weekday Matins:

The reasons for this decline [as claimed by the paper The Present State of Cathedral Music of 1934] were not connected to the growing liturgical emphasis on the Parish Communion and its cathedral equivalent: ‘there is no evidence…. that the decline in the practice of singing Matins daily is due to the singing of Holy Communion instead’. Rather, it was a combination of the difficulty of retaining lay clerks unless they had independent means, and the growing unwillingness of head-teachers and parents of the choristers to allow choristers to miss such a large part of the school day, that had been the most significant factors in the decline.

On Sundays, both in cathedrals and parish churches, the history is quite different; gradually throughout the 1900s, Communion took over from Matins as the main Sunday morning service. It would be interesting to know when regular Choral Matins stopped in Redbourn. Any former members of the choir with memories? When I played in Petersfield in the 1970s we had weekly Communion and Matins, both sung with choirs – difficult then, and unsustainable for long.

Matins, and particularly the Te Deum, were the natural vehicle for public celebration until well into the last century with the Festival Te Deums of Vaughan Williams and Britten, and the Coronation Te Deum of Walton as notable examples. Handel wrote Te Deums to celebrate the Treaty of Utrecht (1713) and victory at the battle of Dettingen (1743). I, for one, have little idea of the significance of these events, and there may be others who know of them only through the music. There is some evidence that at the time the British public was less interested than the Hanoverian exiles. So, pace Shakespeare, Handel’s music after 300 years “gives life to” these unmemorable events.

If you’re going to revive Matins, you can’t do better than go for the canticle settings by Stanford, and we’ll sing his Te Deum and Jubilate in C. Stanford knew that, if you were going to get home for lunch, you needed not to dwell too much over the text of the Te Deum, and there is no repetition of the words. But as always Stanford is able to create a satisfying form by repetition of musical material. The Jubilate ends with the same jubilant Gloria, characterised by antiphonal effects between choir and organ, as the more well known Magnificat and Nunc Dimittis from the same service. The anthem is “O thou, the central orb” by Charles Wood (1866-1926). Like Stanford, he was an Irish composer though from Armagh in the north, and I have mentioned before how the Celts managed to avoid the excess of sentimentality of the English Victorians. Think of the wonderful Welsh and Irish hymn tunes of the period. Wood has contributed many of the most enduring pieces of church music of the early 20th century, and “O thou, the central orb” is one of his best.

In the month of Isobel’s and my Golden Wedding, Jonathan has kindly offered to play the piece that my father wrote for our marriage in August 1967. So Philip Cranmer’s ‘Toccata for a Wedding’, published by OUP in 1969, will be the voluntary.

One thought on “Reformation Choral Matins: Sunday 20th August, 11.15am”