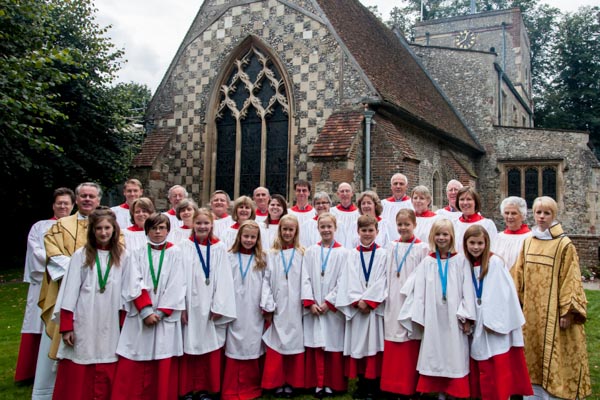 As many of you may know, our organist and choirmaster, Jonathan Goodchild, arranges and directs the music for a choral evensong at St Mary’s on the first Sunday of the month (mostly – don’t come in August!).

This new column is an attempt to draw attention to the music, and was prompted by the service on Sunday 1 May, when we sang a real rarity, the Magnificat and Nunc Dimittis in B flat by
John Stainer (1840-1901), who, as organist of St Paul’s in London, did much to revitalise English cathedral music; and by all accounts, it needed it.

His reputation is undergoing some reassessment, but, apart from occasional performances of his Crucifixion, was, until recently, as one of the many Victorian composers who have been largely dropped from the repertoire. The music of these composers has been out of print for many years, but has begun to make a return in two ways. Publishers can now run off single copies of their back catalogue and so print to order, where in the past a large print run would be required before any copies could be made available. There is also the appearance of the ChoralWiki (www.cpdl.org), which has thousands of out-of-copyright works made available by individual enthusiasts for free downloading, copying and performing. That was our source of the material for Stainer in B flat.

But enough of what has gone. The next choral evensong at St Mary’s is at 6.30pm on Sunday 5 June. The Magnificat and Nunc Dimittis will be sung to Sumsion in G. Herbert Sumsion (1899-1995), who was organist of Gloucester Cathedral for 39 years, confusingly wrote three settings of the evening canticles in the key of G, one for boys’ voices, one for men’s voices and the 1942 SATB version which we will sing. The setting is lyrical and pastoral, the Magnificat tripping along in triple time, the Nunc Dimittis, as often, more sedate. Like Stainer and many other church musicians of the first half of the last century, Sumsion was a versatile musician: very fine organist, inspiring conductor of the Three Choirs Festival, accompanist and chamber musician, and composer of what the Germans call Gebrauchsmusik – he wrote what was needed for when it was needed. It is by performing his music that an attempt is made to keep alive the memory of his other achievements.

Charles Stanford (1852-1924) is often, with some justification, referred to as the saviour of English church music; his Irish heritage helped him avoid the excesses of Victoriana and, through his many anthems and service settings, he showed the way forward for the musicians of the twentieth century. We will sing his beautiful six-part anthem, Beati quorum via integra est (Ps119 v1. Blessed are those that are undefiled in the way: and walk in the law of the Lord), in which exquisite major-minor changes interweave with fluent and elegant imitative part-writing.

There will be a second outing for a new version of the responses by Richard Ayleward (1626-1669). On very flimsy evidence (an odd note missing here, unusual spacing there, and an unbalanced final amen) the present writer has re-edited this well-known setting, by adding a second alto part and elaborating the inner parts. And the voluntary is part of the musical offering: so don’t leave until you’ve heard Jonathan play Mendelssohn’s Fugue in D minor op.37 no.3. Mendelssohn was responsible for the rediscovery of Johann Sebastian Bach and in turn drew much from the older composer. This piece exploits most of the Bachian fugal techniques.

One of the major points of argument in what has become known as the Choral Revival which began in the 1840s was whether the congregation should participate fully in the service or, in a more passive way, be free to reflect on the proceedings. Choral evensong certainly offers the latter. The Choral Revival began not in cathedrals but in parish churches, and it is to the huge credit of local musicians throughout the country that so many churches are today still able to offer regular evening services in this format. Who’s for the occasional matins?