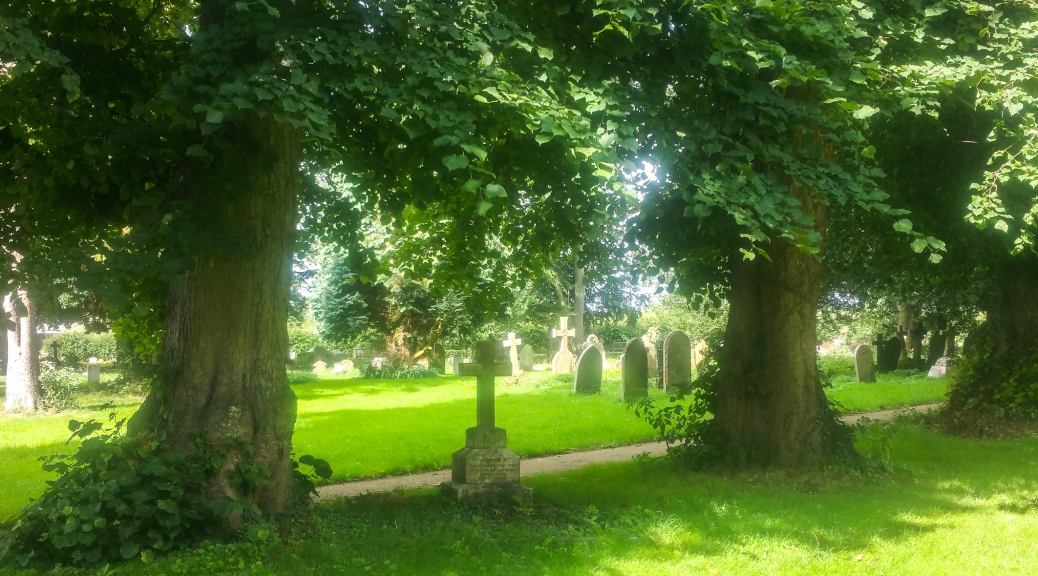 This guide was published in 2018, the one hundredth anniversary of the end of the First World War. It records details of those who died as a consequence of that war and the Second World War and are buried in St Mary’s Churchyard. Their graves are marked by the distinctive design of a Commonwealth War Grave headstone. The plan in this leaflet will guide you to these graves.

A great many other local people lost their lives in these wars, but are not buried here. Their names are recorded on the memorial inside St Mary’s Church (open 10:00 a.m. to 5:00 p.m.), on the War Memorial on Redbourn Common and on the Roll of Honour in the Parish Centre opposite the War Memorial (open 9:30 a.m. to 3:30p.m. Monday-Friday).

They shall grow not old, as we that are left grow old:
Age shall not weary them, nor the years condemn.
At the going down of the sun and in the morning
We will remember them. 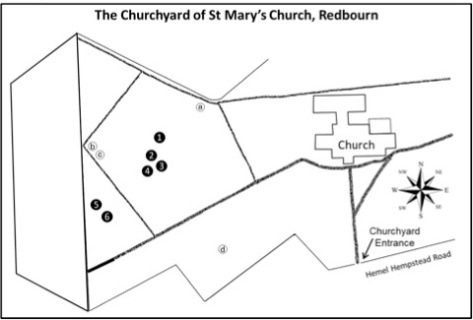 Sergeant, Bedfordshire Regiment. His parents lived in Mansdale Cottage. After training at Aldershot and Salisbury Plain, his battalion was sent to France in 1915. He saw action in the battles of the Somme 1915-1916. He died on 29 August 1916, aged 40.

Colour Sergeant, Bedfordshire Regiment. A tragic case – he encouraged many young men to enlist, but appears to have been broken by the number who were killed and injured, so he shot himself on 6 Feb 1919, aged 48.

Private, Royal Army Service Corps. M2/104388. Born in 1884 in Shipley, West Sussex, to Thomas and Fanny Wood. His father died when he was seven and five years later his mother married John Botting. The 1901 Census shows Michael as a farm worker, and in 1911 he was a stable worker at Roffey Park, a large estate later used for a training camp during the war. 1911 also saw Michael marry Lily Cox in Cuckfield, Sussex. He enlisted in the Army in early January 1915, serving as a driver. It seems likely that he was one of the many thousands of soldiers sent to train at camps in the St Albans area, but he fell ill with scarlet fever and died in the Sisters’ Hospital, St Albans, on 13th July 1915, aged 31.

Private, Durham Light Infantry. Born in 1902 in Redbourn to William and Ann Draper, the 1911 Census shows the family living in Church End. He attended the village school and was later employed in the butcher’s business of Mr. H. E. Arnold. In 1923 he married Violet Eames and they lived in Nicholls Close. He had been a bell ringer at St Mary’s. He was discharged from the Durham Light Infantry as unfit in September 1942 and died in Oster House, St Albans on 16 Feb 1943, aged 41. (further information here)

Herbert Taylor was born in 1909 in Wigan to Edwin and Mary Taylor. He married Dorothy Thornton in 1934 and they later lived in Bettespol Meadows, Redbourn. He had been with 9 (Observer) Advanced Flying Unit at Penrhos when he was taken ill at the end of December 1942. He died of natural causes in the Caernarvon & Anglesey Hospital, Bangor on 19 Feb 1943, aged 33.

He served in Egypt, briefly at Gallipoli and then returned to Egypt. He was commissioned from the ranks in January 1916. He was back at Colchester when he caught Spanish flu and died after several weeks of illness on 20 Aug 1915, aged 19. He is buried in a family grave. (further information here)

The following are not buried here, but their details can be found on family graves in the churchyard.

Killed in action at the Battle of Ctesiphon, in Mesopotamia, 20 miles south of Baghdad, on 24 Nov 1915 aged 25. He has no known grave and is commemorated on the Basra Memorial. (further information here)

A bellringer at St Mary’s. Killed in action on the first day of the Battle of Passchendaele by a shell on 31st July 1917, aged 36. He has no known grave and is commemorated on the Menin Gate. (further information here)