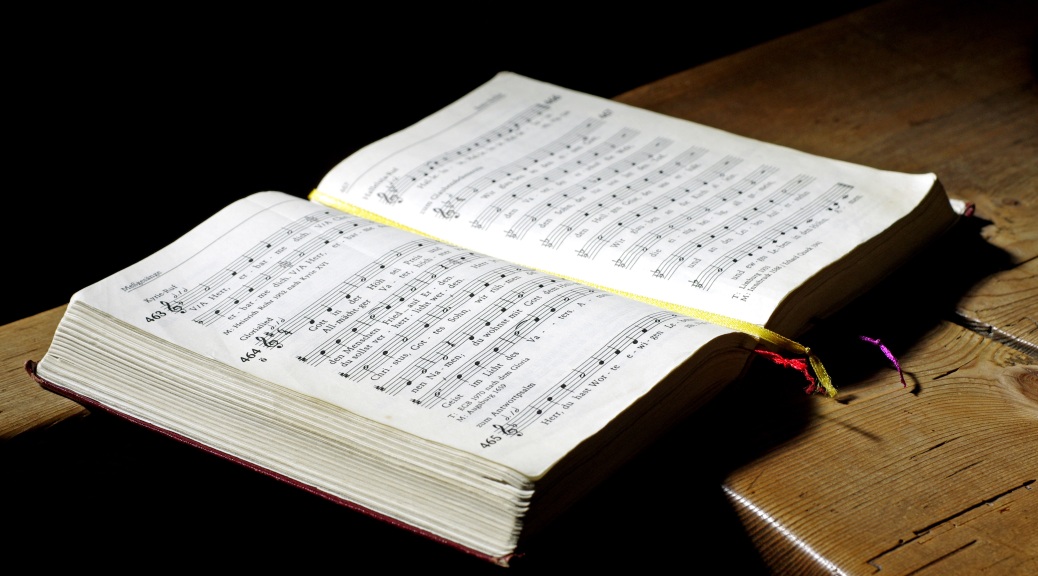 Music plays a significant part in this service. ‘Ride on’ by Grayston Ives (b1948) was commissioned for the Ash Wednesday to Easter for Choirs volume (1998) in the comprehensive OUP series of albums of choral music for all seasons. Away from composing he is Bill Ives, former tenor in the King’s Singers and more recently director of the choir at Magdalen College, Oxford (actually Informator Choristarum). In this post he was responsible for the 2003 recording of the music of Orlando Gibbons (With a Merrie Noyse) which was one of the earliest recordings of Tudor music to explore the use of lower pitch and a choir with high tenors instead of altos. (See last month’s blog.) The words are those of the hymn (HON 435) by Henry Hart Milman (1791-1868), an interesting character whose biography on Wikipedia is well worth reading. The music follows the upbeat nature of the words with prominent use of a rising 5th until “in lowly pomp ride on to die” where all becomes much softer and the choir sings on one note to the end. The organ is independent of the choir throughout and is dominated by the rhythm – crotchet, dotted minim – perhaps illustrating the inevitability of what is to come.

And this is where O vos omnes (O all ye that pass by the way, attend and see: if there be any sorrow like to my sorrow) follows on. The text is an adaptation of Lamentations 1:12 of the Latin Vulgate Bible used as a responsary for Holy Week. If the English translation does not seem quite right, as it doesn’t to me, it’s probably because of familiarity with the King James version, which starts ‘Is it nothing to you’ and which has been set by Ouseley, and Stainer in The Crucifixion. O vos omnes (I wish my computer wouldn’t “correct” my Latin!) was set by almost anyone you can think of in the sixteenth century – and many more since. Our version is by someone you might not have thought of, Giovanni Croce (c1557-1609), a Venetian priest who wrote much music including a set of 4-part motets published in 1597, which almost certainly included this piece. It is simple in style, but effective in communicating the text. Croce was described in a contemporary report as “a reliable singer of moderate quality”. Some of us might be reasonably pleased with such a comment, but I’m not sure it was intended as a compliment at the time.

With The Reproaches by John Sanders (1933-2003) we have reached Good Friday. I wrote about this remarkable piece last year. The Latin Improperia have been in the liturgy since at least the ninth century, but were deleted from the English rite at the Reformation, only to be restored at a later point. If O vos omnes has been set by numerous composers, it is surprising that the Improperia have attracted few, only Palestrina and Victoria of the sixteenth century. Sanders’ setting, in English, has three refrains, two different settings of Micah 6:3, “O my people, what have I done to you? How have I offended you? Answer me!” and the other “Holy is God, holy and strong, holy Immortal One, have mercy on us”, the text of a Greek hymn from the 5th century with references to the Sanctus (Isaiah 6:3 and/or Revelation 4:8). These multi-part refrains are contrasted with single-line plainsong verses, all in a two-part structure as in the first verse: “I led you out of Egypt, from slavery to freedom; but you led your Saviour to the cross.” The form is that of a traditional responsary, such as Allegri’s Miserere, also linked inextricably with Lent, but the slow, languid and rich harmony, often in 8 parts, is more reminiscent of Gesualdo but with 20th-century twists. The penitential mood is set by the preponderance of minor chords: there are only three major chords in the piece. This results in tonally unrelated sequences, for example, G minor-B minor-F minor-A minor at “Holy is God”.

I’m interested in the derivation of hymn tune names, and here’s a bit of obscure pub quiz information. Sir Sydney Nicholson, of whom I wrote for February’s choral evensong, composed the tune to our first hymn ‘We sing the praise of him who died’ (HON 536) and called it Bow Brickhill, which is a village near Milton Keynes. All Saints’ church had a visit from Sir Sydney and the choristers of Westminster Abbey in 1923 and this tune honours that occasion. Also, fittingly, we sing two great chorale tunes used by Bach in his Passions, though sadly HON gives only one of Bach’s matchless harmonisations.

Jonathan plays us out to JS Bach’s Fantasia in G minor BWV542. The improvisatory opening, with all the interest in the right hand and chords beneath, alternates with more rhythmic and contrapuntal sections. Bach thought in such a linear way that even the introductions to his fugues contain fugal passages. Partly because of this, these introductions (fantasias, preludes, toccatas) can stand as complete pieces in their own right.